I often use the command ssh server_addr -L localport:remoteaddr:remoteport to create an SSH tunnel. This allows me, for example, to communicate with a host that is only accessible to the SSH server. You can read more about SSH port forwarding (also known as “tunneling”) here. This blog post assumes this knowledge.

But what happens behind the scenes when the above-mentioned command is executed? What happens in the SSH client and server when they respond to this port forwarding instruction?

In this blog post, I’ll focus on the DropBear SSH implementation and also stick to local (as opposed to remote) port forwarding. I am not describing my personal research process here, because there’s already enough information to share. Believe me ;)

This section summarizes the process without quoting any line of code. If you wish to understand how local port forwarding works in SSH, without going into any specific implementation, this section will definitely suffice. 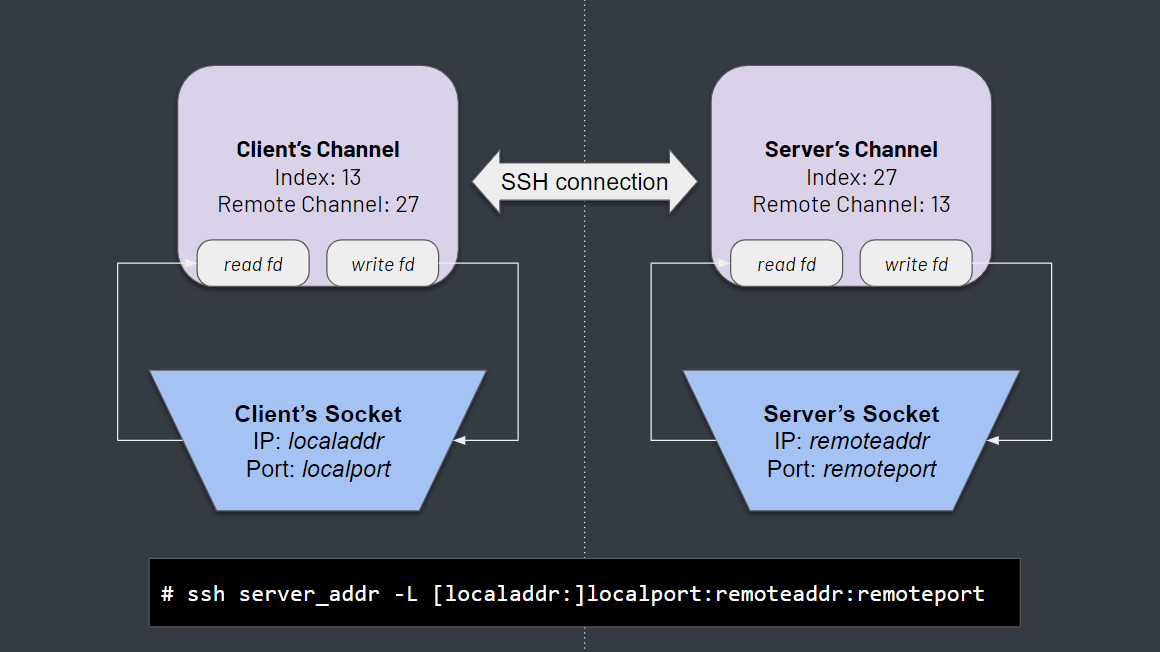 So just to make things clear:

What follows is the specific implementation details of the DropBear SSH server and client. This part might be somewhat tedious, as it mentions many names of structs and functions, but it may help clarify steps from the TL;DR section and demonstrate them through code.

Important note on links: I don’t like blog posts containing too many links, because they give me really bad FOMOs. Therefore, I decided not to link to the source code. Instead, I provide the code snippets that I find necessary, as well as the names of the different functions and structs.

When the client reads the command line, it parses all forwarding “rules” and adds them to a list in cli_opts.localfwds.

In the client’s session loop, the function setup_localtcp() is called. This function iterates on all TCP forwarding entries that were previously added and calls cli_localtcp on each.

The function cli_localtcp() creates a TCPListener entry. This entry specifies not only the forwarding details, but also the type of the channel that should be created (cli_chan_tcplocal) and the TCP type (direct). For each new TCP listener, it calls listen_tcpfwd().

tcp_acceptor() is responsible for accepting connections to a socket. This is where the action happens. The function creates a new channel of type cli_chan_tcplocal (for local port forwarding), then calls send_msg_channel_open_init() to:

Once this CHANNEL_OPEN message is sent successfully, the client fetches the addresses and ports from the listener object, and puts them inside the payload to be sent.

Whenever the server responds with its own channel ID - the client will be able to to send and receive data based on the specified forwarding rule.

Creating a Channel (upon client’s request)

The server is informed of the local port forwarding only the moment it receives the MSG_CHANNEL_OPEN message from the client. Handling this message happens in the function recv_msg_channel_open(). This function creates a new channel of type svr_chan_tcpdirect, and calls the channel initialization function, named newtcpdirect().

The function newtcpdirect() is reading the buffer ses.payload, which contains the data put there by the client beforehand: the destination host and port, and the origin host and port. With these details, the server connects to the remote host and port with connect_remote().

This function creates a connection object c (of type dropbear_progress_connection) in which it stores the remote address and port, a “placeholder” socket fd (-1) and a callback function named channel_connect_done(). Remember this callback for later on!

As you can see in the snippet above, the connection structure is added to the list sess.conn_pending. This list will be handled in the next iteration of the session’s main loop. The connection itself is done from within connect_try_next() function which is called by set_connect_fds(). This is where the socket is practically connected to the remote host.

Assigning the Socket to the Channel

The status of the connection to the remote host is checked in handle_connect_fds, also from the session loop. This is where, if the connection succeeded, its callback is invoked - remember our callback?

The callback function channel_connect_done() receives the socket and the channel itself (in the user_data parameter). The function sets the socket’s fd to be the channel’s source of reading and the destination of writing. With that, all I/O is done against the remote address.

Finally, a confirmation message is sent back to the client with the channel identifier.

This type of write-up is pretty difficult to write, and even more so to read. So I’m glad you survived.

If you have any questions regarding the port forwarding mechanism - please don’t hesitate to reach out and ask! I think the process can be quite confusing (at least it was for me) - and I’d love to know which parts need more sharpening.

It is interesting to go further and understand the session loop itself; when is reading and writing triggered? how exactly server-side and client-side channels are paired? I figured if I went into these as well - this post would become a complete RFC explanation ;) So if you find these topics interesting, I encourage you to read the source code and get the answers.